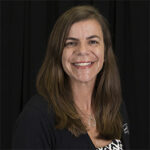 The CSU Student Success Network named Bianca Romina Mothé, Ph.D., professor of biological sciences at Cal State San Marcos, as its new director. As a faculty member and researcher at San Marcos since 2003, Dr. Mothé has helped design novel vaccines for rapidly mutating pathogens, including HIV. She also served as associate dean for undergraduate studies from 2016 to 2018 and faculty director for service learning from 2013-2016.

Throughout her career, in each of her positions in the CSU, a driving purpose of Dr. Mothé’s leadership has been to help students who are at risk of struggling to achieve academic success, particularly first-generation students, students from low-income families, and students of color.

“I’m a first-generation college student,” Dr. Mothé said recently. “I’m Latina. At the college I attended, there was nobody else who was like me; there were no other Brazilians on campus. In my doctoral program, I was the only woman graduate student in the lab. Years later, when I landed at CSU San Marcos as a faculty member, it was incredible to see groups of students who were like I had been when I was going through school. And there was an office on campus that supported first-gen students, called the Office of Training Research and Education in the Sciences. I got very excited, because I knew that this was what I wanted to do, to support these students. I felt like I was home.”

This is the vision, driven by personal and professional experience, that Dr. Mothé brings to the Network, whose overall purpose is to provide spaces and time for middle leaders throughout the CSU system to improve equitable student learning and success.

From Rio to San Marcos: Being a First-Gen Student

Bianca was born in Rio de Janeiro, Brazil, and she moved with her family to the United States after her fourth birthday. When they moved back to Brazil six years later, she was fluent in English and Portuguese. Bianca took to the sciences early and set her sights on medical school. In high school a counselor named Mary McDonald pulled her aside and said her grades were good enough for college scholarships–in the United States.

“I didn’t know what that meant,” Dr. Mothé explained recently. “I told her I couldn’t afford that.” She credits Ms. McDonald with changing her life: steering her to apply at smaller colleges that could offer a full scholarship to an international student interested in the medical profession. Bianca attended Beloit College, where a summer position in a science lab redirected her career interests away from medical school and toward scientific research.

After graduating, she enrolled in a PhD program at UW Madison. “You talk about the challenges of being first-gen?” she said. “Those issues emerged when I was an undergraduate, but they definitely hit in graduate school. It was super tough.” Bianca’s graduate advisor was not very supportive of female PhD candidates, but the lab was active, which provided her with the opportunities she needed. She published several papers and finished her PhD in four years. After a stint at a biotech company in San Diego, she took a faculty position at San Marcos and never looked back.

“At San Marcos, I saw an environment that supports first-gen and marginalized students. That’s why a lot of people work in the CSU,” she said. “In my lab, I know that the A and B students are going to have a lot of opportunities. I like to identify the C students because they’ve dealt with failure and have come through it. I invite them to do research and they do really well in that situation.”

Being a Middle Leader: Challenges and Opportunities Across Campuses

As the CSU Network enters its fifth year, Dr. Mothé sees a wide range of challenges and opportunities for supporting middle leaders as they seek to advance equitable student success in the CSU. “This is a critical time for higher education generally and for the CSU in particular,” she said. “Higher education is changing now, partly due to the pandemic and the social unrest that has occurred. This offers a great opportunity for all of us to reimagine higher education for our most marginalized students, which is a key purpose of the CSU.”

Dr. Mothé highlighted two overall challenges and opportunities. The first involves the incentive structures that govern career advancement for faculty and staff in higher education: “We’re stuck in an incentive system that was generated 150 years ago–the research, tenure and promotion system for faculty, and the lack of leadership incentives for staff who work with students, beyond their narrow job duties. I think that these incentives need to be redesigned to include and feature leadership in supporting student success, particularly for equitable approaches serving marginalized students.”

Secondly, Dr. Mothé pointed to the challenges on every CSU campus to come together across functions, departments, and administrative divisions to focus on student success, including examining student data, identifying administrative barriers, sharing information about what works, and revising practices and policies to advance student learning and success. “We need to share what we’re doing across campuses,” she said. “One of our challenges continues to be working within a very large and diverse higher education system where each campus has its own set of practices and approaches, with few opportunities to exchange ideas and strategies across campuses.”

For both of these challenges, Dr. Mothé pointed to the CSU Network as being a game changer in providing opportunities for middle leaders in the CSU to step into leadership roles and build relationships–within their own campus and across the CSU system–to examine evidence, develop innovations, and share their practices for equitable student success. Middle leaders are defined by the CSU Network as faculty, staff, and administrators who have leadership roles in working with students, whether or not their position title acknowledges these roles.

“I am a middle leader, I’ve been a middle leader for a long time now,” Dr. Mothé said. “We’re not going to change the incentive structure overnight in higher education. And we have a long way to go in the CSU to build practices and systems that fully support equity and student success. But the CSU Network provides time and space to support middle leaders in having these kinds of conversations. I am extremely proud to see the engagement of campuses coming together in the Network to tackle these kinds of issues from a cross-functional perspective.”

Dr. Mothé pointed to impacts the Network has already had on campuses, including actions taken in the midst of a pandemic:

“It is an honor to be stepping into this role and working with individuals that are so committed to these issues,” Dr. Mothé said. “This includes talented colleagues and students from campuses throughout the CSU, both those participating in the events and those designing and managing them. The Network matters because it creates time and spaces for middle leaders to get to know their colleagues on their own campus and throughout the state, and work together on shared issues to address and improve equity and student success.”

The CSU Student Success Network is facilitated by the Education Insights Center (EdInsights) at Sacramento State University. For more information, email studentsuccessnetwork@edinsightscenter.org or visit the EdInsights and Sacramento State websites.

9:00am
Navigating Uncertainty Together, A Virtual Conversation Series